After a few weeks of downtime (illness, holidays, etc), I’m more than ready to jump into 2015. I love new beginnings, easily one of my favorite things, and the start of a new year is most exciting for my type-A, goal setting self.

I joined Ali Edward’s One Little Word (OLW) last year for the first time and loved it. While I didn’t end up finishing the prompt for every month, I can definitely say that picking a word and focusing on it for 2014 changed the course of the year for me. I started the year pretty blue and picked CHEER, thinking maybe it would help with the funk. I ended the year feeling grateful, having made a new career path an option, and getting ready to expand our family. Way, way more than I had hoped for or even thought possible. I’m not going to say that doing OLW is the reason for any of these things, but for sure focusing on the positive in my life lead to me walking through open doors that otherwise I likely would have walked right past.

It was a no brainer to join again in 2015, though I went through a few words before settling into one that I love. This year is going to be very different for me and I took some time to sit down and think about what I want it to look like, keeping in mind that I have no idea what’s really in store for me since I’ll be experiencing many new things.

My first thought was that I will likely spend a lot of the year overwhelmed. And that’s totally okay if I don’t let myself drown in it. I want to recognize when I feel overwhelmed and then act on it, which lead me to DO. I am a doer. I am not a strategizer, but rather an executioner. When I feel overwhelmed, I do things to make sense of the situation. I am remarkably good at starting and finishing projects. I am not remarkably good at coming up with the ideas (hence why all my crafting is linked back to a source from someone else’s blog).

For a few months I had settled on DO as my word, something to have there with me while I figure out motherhood (and all the various relationship changes that will come with it) and a potential new career. But then I realized that it was only really addressing one part of the year. I hope 2015 isn’t summarized with only “I was overwhelmed but I did.” I hope that is part of the story this year, but not the whole story. 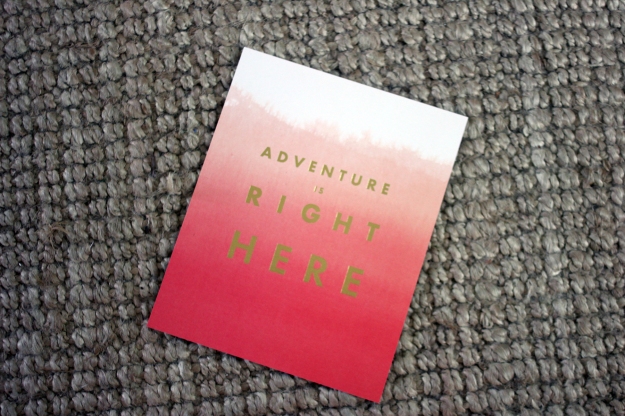 Earlier this month I was going through cards from a Happy Mail shipment and came across this print. I loved the sentiment when it first arrived,  but had saved it thinking it was a little too girly to put in the nursery. I decided to frame it at a later date if Martian ends up being a girl.

After giving it a second look, I realized my word had found me. ADVENTURE is so perfect for 2015. And that print is now hanging to the right of my desk so I can be reminded of it daily.

2015 will be full of new adventures.  Motherhood and potentially a career change. There’s not much to say about other than to recognize and embrace.

There is adventure in the everyday. One thing that I worry about is how I will handle the change from career girl to mom. It’s no secret I’m a little burned out on my current career, but it’s what I know. I leave the house everyday, usually showered and looking presentable. I go to happy hours, I engage with clients, I enjoy my work friends. None of these will exist anymore, at least for six months and potentially longer. I want to focus on exactly what that print says – adventure is right here. Everyday life is an adventure; one that I want to be grateful for, not resentful of.

I’d like to seek out new (small, not life changing) adventures. I really do mean small scale here, but change things up a bit. The last two years were the Year of Greg Going to Denver (2013) followed by the Year of Beth Going to School (2014). Adventures haven’t been high on our list of priorities. I can’t tell you when we last tried a new restaurant in Seattle (really, I’m trying to think about it and I have no idea, though we eat out plenty) or when we last took Alfred on a hike or walk somewhere other than Green Lake. As a person who loves (loves, loves) routine, I’m even a little bored.

If you’re interested in OLW, you can sign up through the end of the day today (12/31/14) for the reduced price of $26 for a year long class. Starting tomorrow it will be $31. I have no incentive in you signing up whatsoever. I just think it’s an awesome idea that helped me shape 2014 and I look forward to seeing what it brings in 2015. 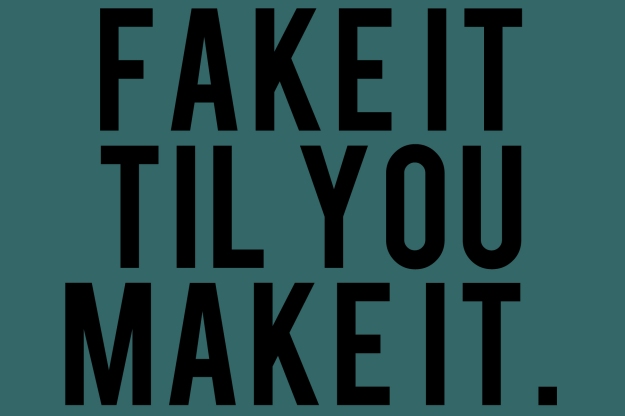 1. I sat down this week and did half the January work for my One Little Word class. My first observation with “cheer” is that happiness is something you cultivate. It doesn’t just happen. And some days all you feel like you have is pretending that you have it. But more often than not, that’s enough to find it.

2. I’m so done with illness. I got the flu in December, Greg got it this month, then I followed that with a terrible head cold. Everyone at work is constantly sick. I’m over it.

3. I read these two really interesting articles (1, 2) on goals versus systems this week. I’m still mulling them over. As a goal loving person it’s hard to read that perhaps they are not the most efficient way to effect change, but I do see the point of systems. I also noticed that several of the “goals” on my Winter Bucket List tend to fit more in the system category.

4. I currently have an entry on my to do list to “digitize meat inventory”. The only thing more sad than that is that I haven’t started yet because I can’t decided exactly how I want to lay out the spreadsheet.

5. I’m super excited for a family adventure this weekend! It’s dog friendly and a new place in Washington. It’s not supposed to rain and it’s going to hit 50 degrees. I don’t need much more than this.